I wanted to blog about this back in the beginning of November when I saw something at the American Music Awards that really bugged me, but was only just reminded of it now, so here goes.

Music is a funny thing. Ever since reading ‘This is your brain on music’ I’ve become fascinated with music, way beyond its personal hedonistic value. Music, for most people, has an amazing power to tap into and alter our emotional state. How? Well it’s a bit of a mystery. Is it a side-product of language? Is it proto-language? Is it its own thing in its own right? I tend towards the later and maybe one day I’ll write up why.

One thing is for sure and that is, music is personal. What moves you will not move another person. There is a lot of cognition and emotion attached to this. We tend to like what we hear. My mum loved classical music and English church hymns. This is what she listened to as a youngster and learnt to play on piano. Not-so-strangely enough, so do I. Do I listen to classical music a lot? Not really. Do I like English church services? That’s a big no. Am I even a patriotic English boy? Not on your life. But, ‘I vow to thee my country’, will make me cry tears of joy? sadness? I don’t even know. But, Every. Fucking. Time. It’s in me.

I also grew up listening to 80’s new wave and synth-pop. The analog synthesizer, as an instrument, modulated my brain and became in many respects what music is. Certainly a big part of it. The precise saw-wave and square-wave tone with their rich overtones, filtered in imaginative ways, can create sounds and therefore mood in a plethora of ways that simply exceeds what mechanical construction of string (guitar etc) and woodwind (saxophone etc) instruments can. And yet, no matter the source, so long as a sound is composed of even (woodwind) or odd (string) harmonics, the rules of harmony still apply. Major and minor chords and keys still work with electronic sounds. 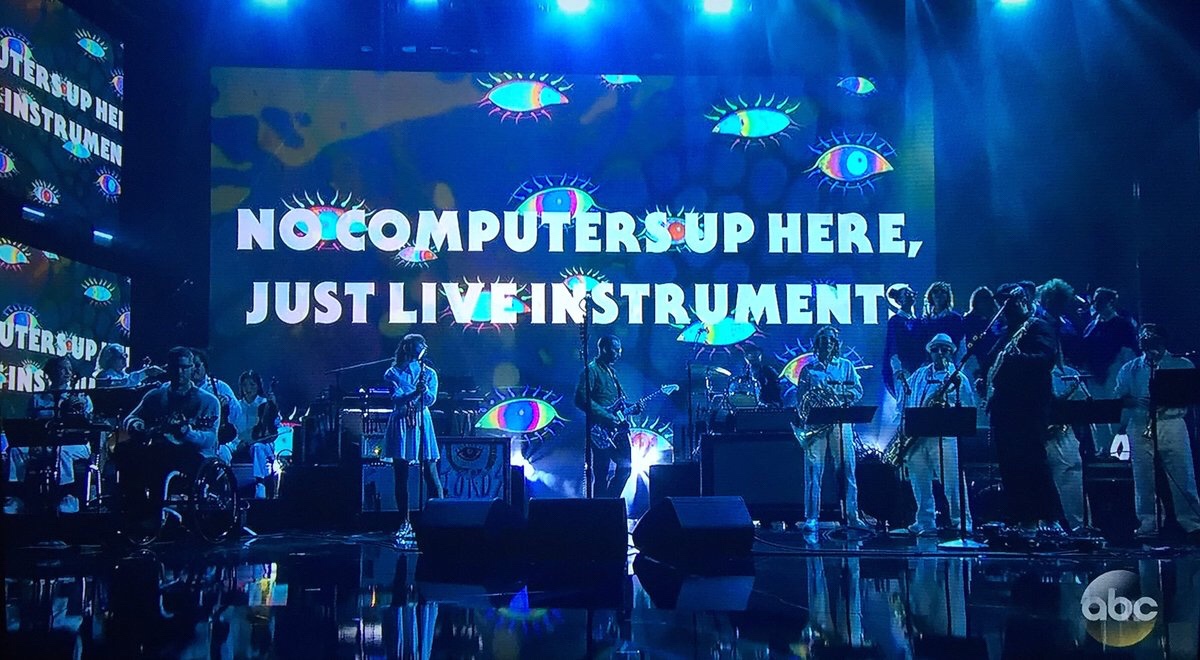 This flashed up during a performance by ‘Portugal. The Man’. Lets unpack this…

Firstly, let’s go with the obvious. Ummmm, the projection is clearly computer driven. And no matter what you think, the visuals are a big part of a performance. I’d say a massive part of what they were trying to express at this moment. This ought to fling the least sensitive and most mis-calibrated irony meter into orbit. But let’s keep going. The instruments were designed/constructed/built without any aid from computers? Their amplification was entirely driven by analog electronics? The mastering and propagation of their sounds, all done with transistors biased for analog, not digital response? Have they not honed their sound in response to how they sound, using digital circuits? Of course they have. Their sound would not be what it is without them using computers and digital technology. They would sound different without it. No musician, immersed in a modern technology world, is immune to the influence of the digitization of sound and how that informs their sound. I’m not saying they would sound worse without the digital influence, but they would have a different sound. A sound that might even irk some of their fan base. Lastly on this point, I guess their music teachers weren’t up there either so they had no music teachers? Of course they did and I’m sure they would acknowledge that. Ugh, but they show no appreciation for their source of musical inspiration – or they aren’t aware of it.

But lets get a bit deeper and controversial. What really got under my skin is the hubris and arrogance of that computer-generated screen projection. Clearly, what ‘Portugal. The Man’ are saying is that they have real skill in music and performance because they don’t need computers – DJs suck. DJs cheat. DJs don’t have talent.

Ok, lets go over this.

First, lets make a distinction between DJs and Dj/Producers. DJing is beatmixing and paying a little attention to matching and moving between keys. You can teach a misbehaving macaque monkey to DJ. Some talent – presumably beyond what a macaque can handle – goes into making a set move the listener through a 2+hour period of time. So lets put aside that local club DJ who spins tracks between lines of coke and most likely will never grow up – like that macaque. Think DJ Pauly D. Pauly D might compose some tracks, but they are largely panned as shit. He doesn’t have a following beyond girls who want to root him.

DJ/Producers (just producers or electronic producers from now on) on the other hand are musicians that compose predominantly, although not exclusively, in the medium of computers and entirely synthetic sounds or samples. It should be noted that producers will use ‘conventional’ instruments, particularly guitars, piano and vocalists, from time to time. I assert that electronic producers are far more open to the potential of instruments and novel sounds than any other musician, by many orders of magnitude. And this is what I love about the medium. I’m never bored. Every new track (from a talented producer – the kind I listen to) has so many new elements to its sound. You just have to be open to it to hear it all.

Let me explain all this by example – not even a good example – just what I have at hand this minute. Right now I’m listening to a set by Oliver Smith from ABGT250 (I was there live for the performance!) . Its an hour long set with 11 different songs in it. The transition from ‘Solina’ to ‘On the Moon’ introduces a completely different base-line sound. He jumps from E major to B minor through a percussive part (otherwise the keys would clash). Whats so impressive? Well for starters, new base-line sound!!! Im sorry but your typical 4 string bass guitar sounds the fucking same in every track. Its boring. F-G-C-C-F-G-C-C chords over and over. But the availability of different bass sounds, not the chords, it’s timbre, tailored to the different chord pattern of each of the tracks in Oliver Smiths set is genuinely creative. There is a completely new-sounding bass-line in every track! Now if you don’t follow all that or it just doesn’t make sense to you or you don’t care, I don’t hate you. I get it. You haven’t trained your brain to understand the complexity. I doubt the complexity of northern Australian didgeridoo music means as much to you as, well, the natives of northern Australia. But that doesn’t mean there is no talent or intricate detail in their music. The creative elements that go into Oliver Smiths performance were put down when crafting the bass line for each song, along with all other elements from melody to percussion through to the decision to mix these two tracks together (after production of each track), knowing full well how to transition would work and what mood it would produce.

And to be completely honest now, a computer/robot could play a bass guitar in a rock band. An electronic producer plays a computer. Who is the well trained macaque?

None of this is to say that electronic music and producers work in a fantastic world without its own limitations and problems. Certainly, live improvisation is a problem. I’d love to see it, and I think it is possible. But to be honest I don’t think most people want it, which is a bit of a shame. Most people want their band to sound like they do on their phone. Part of the emotional aspect of music is the understanding and recognition of what you are listening to – its why modern western music for the last 500 years has been using the same chords and key signatures and largely the same kind of instruments. A poorly appreciated element of music is the element of surprise but I haven’t had a rock band surprise me musically either. Well, not since Nirvana. I was about 18 then and all music was still new to my developing brain. ‘Portugal. The Man’ sound like a piss weak Nirvana – couldn’t quite make it to the bottom of the bottle so they sound just like everyone else who couldn’t go all out. No edge. I’ve heard it before.